The England and Wales Cricket Board (ECB) have today announced the schedule for the new Bob Willis Trophy, ahead of the commencement of the shortened 2020 domestic season.

The one-off red-ball competition will get underway on Saturday 1st August and will hold first-class status, but is a separate competition from the County Championship, and will comprise three regionalised (North, Central & South)  groups, consisting of six counties per group.

Hampshire will play five group-stage matches behind-closed-doors in the South Group, facing Essex, Kent, Middlesex, Surrey and Sussex. The two group winners with the most points will go on to contest a five-day final. 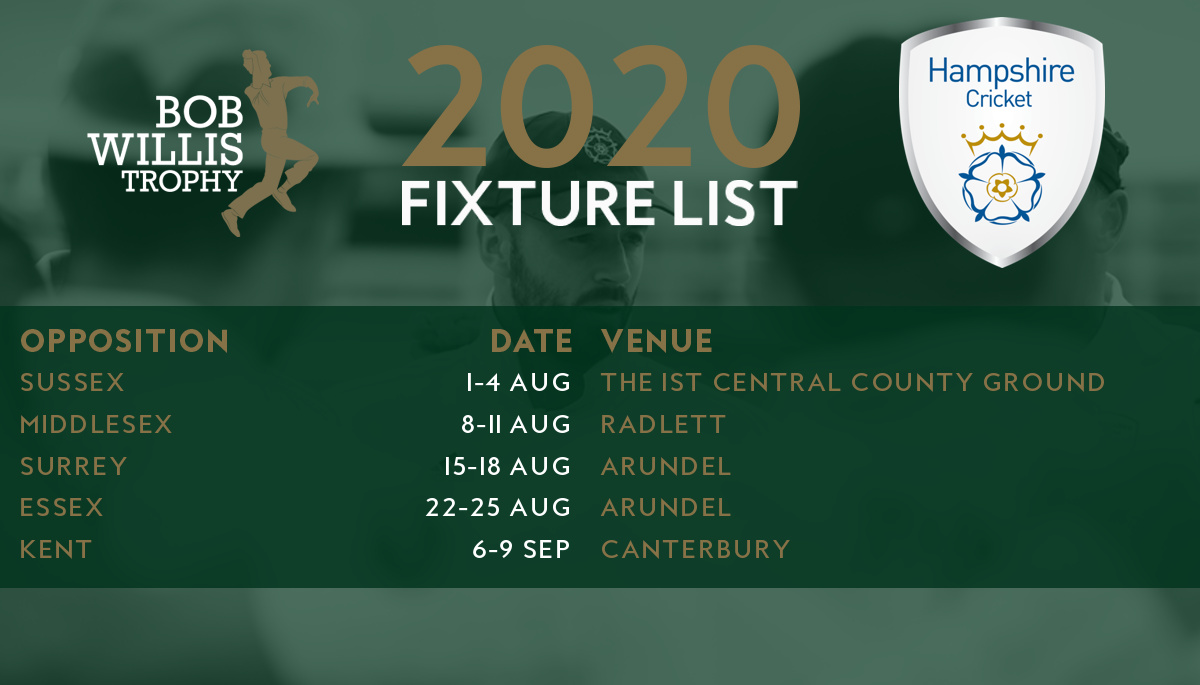 Hampshire begin their Bob Willis Trophy campaign against local-rivals Sussex, travelling to Hove in the opening round of fixtures on Saturday 1st August, before facing Middlesex at Radlett on Saturday 8th August in the competition’s second clash.

Hampshire, who will utilise Arundel Castle Cricket Club for their two home Bob Willis Trophy fixtures, will host Surrey on Saturday 15th August, before then welcoming Essex to the venue for the penultimate South group fixture of the campaign starting on Saturday 22nd August.

Kent will be Hampshire’s opponent for the final group fixture which gets underway on Sunday 6th September, with the competition’s five-day final scheduled to begin on Wednesday 30th September.

Fixtures in the Bob Willis Trophy will be played behind-closed-doors, however fans will be able to follow all of Hampshire’s matches courtesy of live streams.

The ECB have also confirmed the shortened 2020 domestic season will feature a special edition 50-over women’s competition, contested by the eight new teams in the women’s elite domestic structure, including the Southern Vipers.

This competition will also be regionalised, into two groups of four teams, with the group winners meeting in a final. The staging of the competition reflects the ECB’s commitment to continue the journey to professionalise the domestic game for women.

Fixtures for the women’s domestic competition are set to be announced alongside confirmation of the full schedule for the Vitality Blast in August.

The domestic competitions will be staged under strict health and safety protocols with the Bob Willis Trophy also set to feature ECB Board-approved changes to playing conditions to help ensure the wellbeing of players, most significantly fast bowlers, following the long lay-off due to COVID-19.

The playing conditions have been put in place following extensive medical research and in collaboration with the First-Class Counties and the Professional Cricketers’ Association, and include:

The full list of Bob Willis Trophy fixtures are now available for fans to view in the free-to-download Hampshire Cricket App. The first of its type in English county cricket and designed to bring Hampshire supporters closer to the action, the App can be downloaded on all Android and iOS devices.