Hampshire Hawks have secured a record-breaking eighth trip to T20 Finals Day, which will be hosted at Edgbaston on Saturday 18th September.

The Hawks will play against Somerset in the first semi-final of the day. Click the link below to read more.

The T20 Cricket Social landed at The Ageas Bowl this summer in the form of seven huge home Vitality Blast matches, before an exhilarating quarter-final against Notts Outlaws at Trent Bridge in late August saw the Hawks secure a record-breaking eighth trip to T20 Finals Day.

Hampshire Hawks contested seven home group stage Vitality Blast fixtures at The Ageas Bowl in June & July, which included a triumphant T20 double-header day seeing Essex Eagles and local rivals Sussex Sharks both defeated on Friday 16th July, before the Hawks wrapped up their South Group stage in an astonishing run chase against Glamorgan on Sunday 18th July, sealing their progression to the knockout stages of the Vitality Blast!

The Hawks then secured their record-breaking eighth trip to T20 Finals Day, in a stunning win against Notts Outlaws in the Vitality Blast quarter-final in late August.

The Hawks will face Somerset in the first semi-final of the day, beginning at 11am.

All tickets are sold via Edgbaston's ticketing service.

Following government announcements throughout the summer, capacities for Hampshire Hawks' 2021 Vitality Blast matches had to be restricted, and therefore tickets were sold out.

Unfortunately, with government restrictions not being lifted until 19th July and all T20 matchdays falling before then, all home T20 matchdays had restricted capacities, meaning that these games were only open to Hampshire Cricket Members, Members' guests, T20 Passport holders and Hospitality guests.

Individual match ticketholders for these fixtures will be refunded automatically by 23rd July.

More information regarding implications of government easing of restrictions being delayed has been communicated to 2021 T20 ticket purchasers via email.

2021 T20 Passport holders are able to access all of Hampshire's home Vitality Blast group stage fixtures, despite the capacity restrictions enforced due to the extension of government restrictions.

Our Ticket Refund Promise means that if you do purchase tickets, and are unable to attend because the match is cancelled, played behind closed doors, or with limited capacity, you'll be entitled to a refund.

For more information on our Ticket Refund Promise and the work we're doing to plan for the safe return of fans this summer please check out our FAQs.

A range of hospitality packages were available for this summer's Vitality Blast group stage matches.

You can now access tickets for matches at The Ageas Bowl and gain admission to the ground with just your mobile device by downloading the free Hampshire Cricket App. 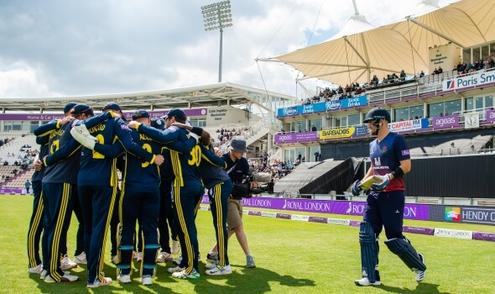