The England and Wales Cricket Board (ECB) has announced the 2023 fixtures for men’s county and women’s regional domestic competitions with Hampshire’s fixtures for next season now confirmed.

Hampshire will get their season underway at home as they welcome newly promoted Nottinghamshire to The Ageas Bowl for the opening round of the LV= Insurance County Championship, starting on Thursday 6 April.

James Vince’s side will then take on 2022 champions Surrey (13 – 16 April) and Northamptonshire (20 – 23 April) in back-to-back away games, before returning to The Ageas Bowl for a match against Warwickshire (4 – 7 May).

Following two more rounds of matches in the LV= County Championship, the Vitality Blast is set to start in spectacular style with Edgbaston hosting Vitality Blast Off on Saturday 20 May.

Hampshire Hawks’ Vitality Blast title defence begins shortly after with a trip to Taunton as they face off against Somerset (24 May), the side who have been the Hawks’ opponents in the last two Vitality Blast semi-finals.

The Hawks’ next two games, against Middlesex and Surrey, will be part of mouth-watering T20 double-headers with Southern Vipers at The Ageas Bowl on 26 and 31 May. The Vipers will be taking on Western Storm and Thunder on each day respectively.

An away match against Essex Eagles (2 June), comes the day before the first ‘el clasicoast’ of the season as Sussex Sharks make the short trip to The Ageas Bowl for a Saturday night match (3 June) under the lights – with the reverse fixture at Hove coming on Friday 16 June.

The rest of June and July brings more T20 and County Championship action, before The Ageas Bowl plays host to a Women’s Ashes ODI between England and Australia on Sunday 16th July.

Vitality Blast Passports – which offer admission to all seven T20 matchdays at The Ageas Bowl in 2023, including the double-headers with Southern Vipers – are now on sale at the discounted Super Early Bird rate of just £99 – and what’s more those fans securing theirs at the Super Early Bird rate will also receive a free ticket for a guest to use at the Hawks’ first home match on Friday 26 May.

A home match against Middlesex on Tuesday 1 August kicks off Hampshire’s One-Day Cup campaign with eight group matches across August as a young Hampshire side will look to build on their impressive performances in 2022’s instalment of the One-Day Cup.

The final month of the 2023 season will see Hampshire host Somerset (3 – 6 September) and travel to Essex (19 – 22 September) before they welcome Surrey to The Ageas Bowl (26 – 29 September) for, if the 2022 season is anything to go by, what could be a potentially decisive match. 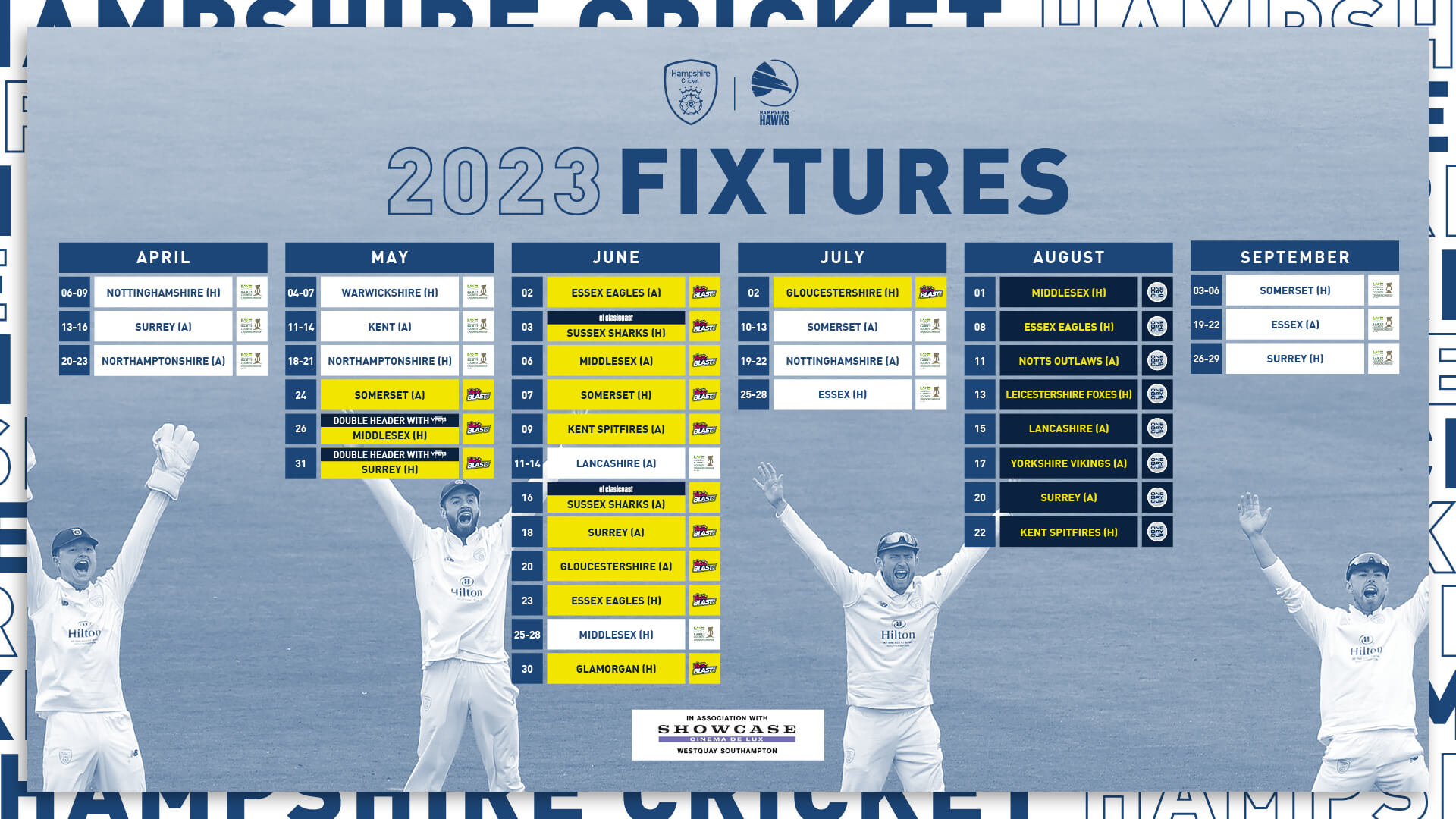 Another England ODI will take place at The Ageas Bowl in September with England Men taking on New Zealand on Sunday 10 September.

Southern Vipers’ schedule for the 2023 season has also been announced today and full details can be found here.

The best way to catch Hampshire in action all year long in 2023 is with a Hampshire Cricket Membership.

2023 Members also receive access to an exclusive allocation of tickets for next summer’s England Women’s Ashes ODI against Australia and the otherwise sold-out England Men’s ODI against New Zealand, alongside a whole host of other exciting benefits.

For more information on Hampshire’s Membership offering please follow the link below.

Vitality Blast Passports offer access to all seven of Hampshire Hawks Vitality Blast matches at The Ageas Bowl in 2022 - at the best price!

A limited number of Super Early Bird Passports are currently available - for just £99 - and can be purchased via the link below.

Fans can now register their interest to ensure they’re the first to know of all ticket news once it arrives.

Hospitality packages for all of Hampshire's LV= Insurance County Championship and One-Day Cup matches are on sale now, while fans can register their interest for 2023 Vitality Blast packages.

Visit the link below for more information.