This summer will see fans able to make use of free buses to and from The Ageas Bowl for 2022’s Vitality Blast and with just two weeks to go until the start of the competition, fans can now book their spot on these free buses.

The free buses will be running from both Hedge End and Southampton Airport Parkway train stations at all seven of Hampshire Hawks T20 matches this summer.

These free direct buses will run continuously from 4:30pm for weekday fixtures and 12pm for weekend fixtures.

The buses will depart from immediately outside both stations - simply head for the Hampshire Hawks flags upon arrival at the stations!

You won't need a ticket or any accreditation to use the free buses - simply turn up at the stations and get on board - however, if you are planning to use the buses we would ask you to complete the short registration form (available below) to ensure we're able to provide enough vehicles for all fans using the services.

The free bus services make it easier and more affordable to get to The Ageas Bowl for this summer’s Vitality Blast than ever before.

It also offers a greener, more environmentally friendly way for fans to travel to and from the ground, with a whole host of stations across the South being serviced by trains stopping at Hedge End and Southampton Airport Parkway.

The travel times from popular destinations to Southampton Airport Parkway or Hedge End are as follows:

Fans enjoying a summer’s afternoon or evening of Vitality Blast action at The Ageas Bowl can look forward to free family-friendly activities, live music and a whole host of off-pitch entertainment as well as the best food and drink in English cricket – that’s in addition to all the edge-of-your-seat cricketing action that T20 promises.

Individual match tickets and seven-match passports are on-sale for this summer’s Vitality Blast at the cheaper Advance rate - with fans saving over £100,000 on tickets and passports courtesy of Hampshire Hawks' recent Early Bird discount window. 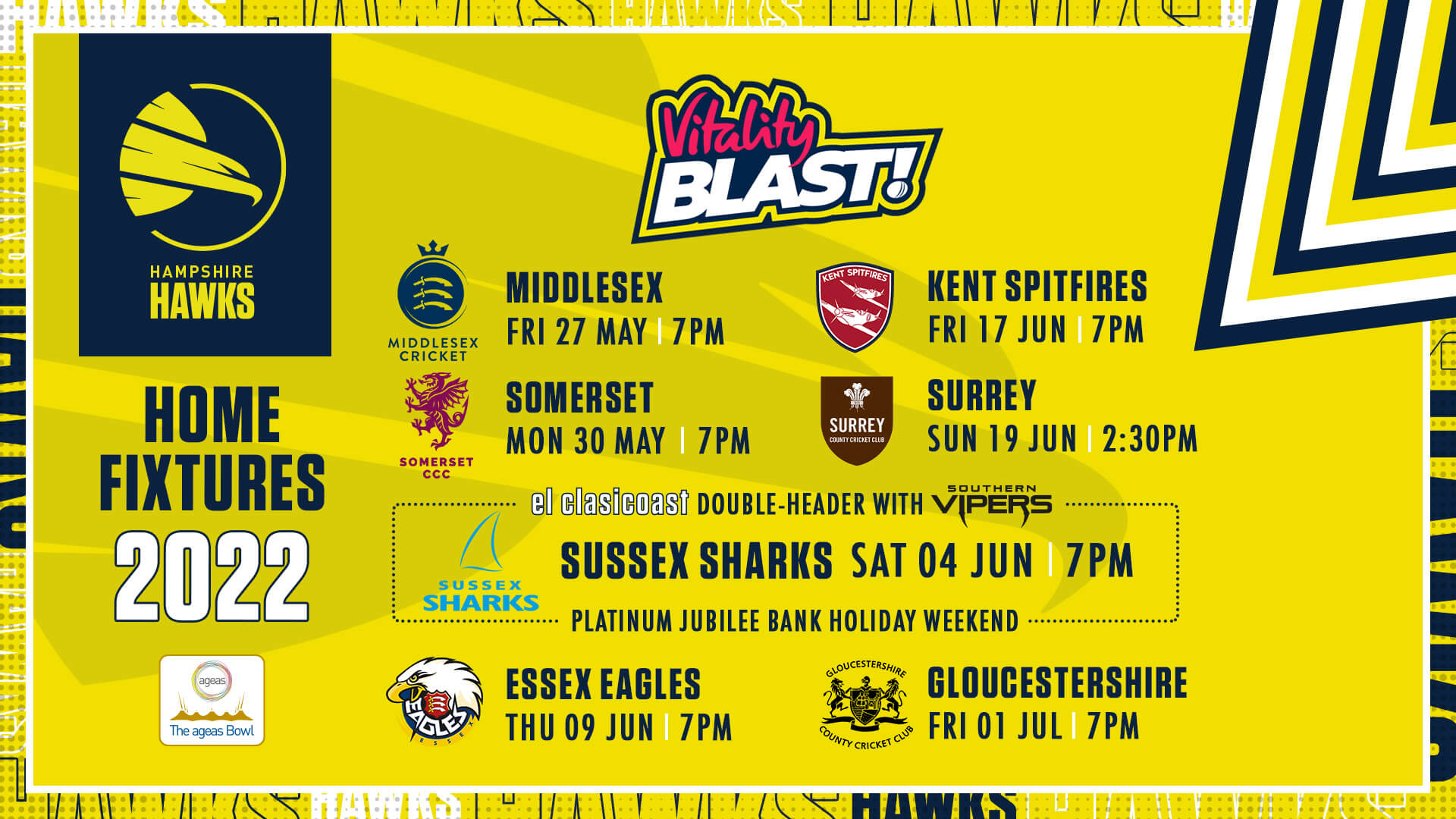 A Vitality Blast Passport gives you access to all seven of Hampshire Hawks’ home matches at The Ageas Bowl this year, including the huge Platinum Jubilee Bank Holiday weekend 'el clasicoast' clash against local-rivals Sussex Sharks on Saturday 4th June

To purchase individual match tickets or a Vitality Blast Passport simply click the link below.

Hampshire Hawks have also announced a brand-new type of ticket for this summer’s T20 matches at The Ageas Bowl, the Vitality Blast Plus ticket, which offers an upgrade on general admission tickets with premium reserved seating and access to a private, pitch-facing lounge and bar.

A limited-number of these new Plus tickets are available at the Advance rate for each of Hampshire Hawks’ seven Vitality Blast matches at The Ageas Bowl this summer, and will be available until 11:59pm the day before a specific matchday, after which ticket prices increase to 'On The Day' prices.