The Hundred is the new 100-ball cricket competition, which started in the UK in 2021.

Click here to find out more about the structure and format of The Hundred.

Southern Brave are one of the eight sides in the competition, based at The Ageas Bowl.

Southern Brave contested five jam-packed matchdays and a huge Eliminator at The Ageas Bowl in 2022, with the Women's side winning all five home matchdays and the double-header which helped them progress to the Finals, where Anya Shrubsole's Women's side finished runners-up for the second consecutive year.

The inaugural men's winners kicked off this year's 100-ball competition at home at The Ageas Bowl against Welsh Fire on Wednesday 3rd August, before three double-headers, which showcased both the men's and women's teams.

Tickets were sold out to all home Southern Brave matchdays in 2022 whereas limited tickets were available to The Hundred Eliminator hosted at The Ageas Bowl on Friday 2nd September.

Two priority windows took place before the general sale began on 20th April. 2022 Hampshire Cricket Members had first access to discounted, Members' price tickets for The Hundred during an exclusive priority period which began on Tuesday 22nd February as a benefit on their Membership.

Tickets to The Hundred Eliminator at The Ageas Bowl on Friday 2nd September can be purchased via the link below.

The Hundred announced their squads for the 2022 campaign.

Take a look at Southern Brave's players for this summer's 100-ball competition, including world class stars such as Jofra Archer, Smriti Mandhana, Marcus Stoinis and others, whilst the Hampshire and Southern Vipers contingent remains strong.

Squad selections were made during a player retention window, before the remaining places were filled during The Hundred Draft. Click here to find out more about the draft process.

Follow the link below to see more about the full Southern Brave squads and head coaches, Mahela Jayawardena and Charlotte Edwards.

More information regarding The Hundred will be available soon. Visit www.thehundred.com for the most up-to-date news about the competition.

Witness the exciting 100-ball competition in 2022 and support The Ageas Bowl-based Southern Brave in style with the venue's range of premium hospitality packages.

Follow the link below to find out more or book premium hospitality packages for Southern Brave's group stage fixtures and The Hundred Eliminator.

The Ageas Bowl Store have a number of Southern Brave retail products available to purchase, such as leisurewear and accessories.

Follow the link below to browse products online, or pop into The Ageas Bowl Store in-person (open 10am-4pm, Mon-Fri). Click here to find out how to access the on-site store. 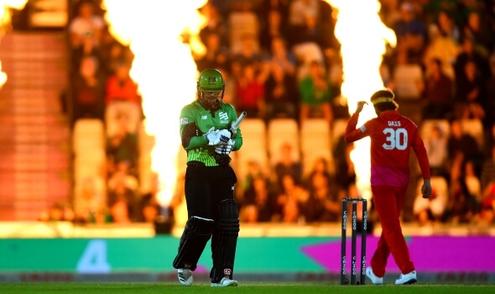